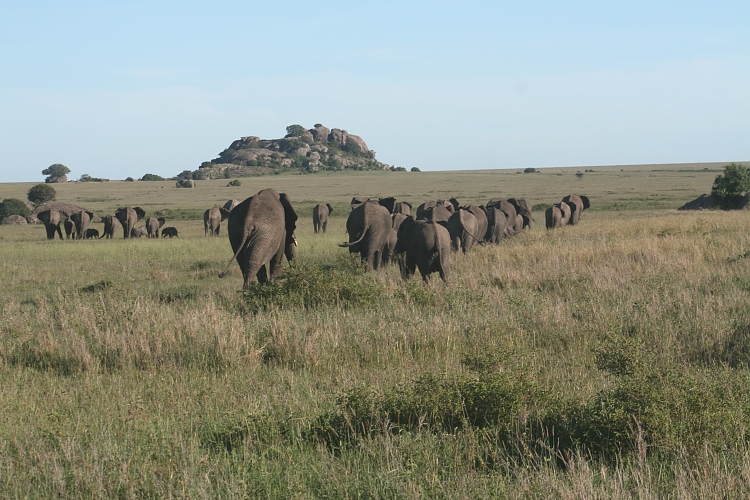 Serengeti meaning an 'extended place' is undoubtedly the best-known wildlife sanctuary in the world, unequalled for its natural beauty and scientific value. With more than two million wildebeest, half a million Thomson's gazelle, and a quarter of a million zebra, it has the greatest concentration of plains game in Africa

With more than two million wildebeasts, half a million Thomson's gazelle, and a quarter of a million zebra, it has the greatest concentration of plains game in Africa. The wildebeest and zebra moreover form the star cast of a unique spectacular - the annual Serengeti migration. Although not confined to a specific time, the migrations tend to occur around May or early June. So strong is the ancient instinct to move that no drought, gorge or crocodile infested river can hold the huge herds back.

A unique combination of diverse habitats enables it to support more than 30 species of large harbivores and nearly 500 species of birds. Its landscape, originally formed by volcanic activity, has been sculptured by the concerted action of wind, rain and sun.

It now varies from open grass plains in the south, savannah with scattered acacia trees in the centre, hilly, wooded grassland in the north, to extensive woodland and black clay plains to the west. Small rivers, lakes and swamps are scattered throughout. In the south-east rise the great volcanic massifs and craters of the Ngorongoro Highlands. Each area has its own particular atmosphere and wildlife.

With 14 700km² of rolling plains are covered by long and short savannah grasses and continue to serve as the home of over 35 species of plains mammals. Over 3 million animals coexist in the park, making it famous for its incredible variety of wildlife. <i>These include</i>: Patterson's eland, Klipspringer, Dik-dik, impala, Zebra, gazelles, water, bush and reed buck, topi, kongoni, cotton's oribi, grey bush duiker, roan antelope buffalo, and wildebeest. The annual wildebeest migration sees the hundreds of huge herds of herbivores moving in a circular, clockwise direction between the Serengeti's Western Corridor and Kenya's Masai Mara Game Reserve.

There are also the more commonly sought larger mammals such as giraffe, rhino, elephant and hippopotamus. Nearly 500 species of bird, including vultures, storks, flamingos, martial and fish eagles, ostrich can be found as well as crocodiles, a number of species of snakes and lizards.

The Serengeti National Park has been internationally recognised as part of Serengeti-Ngorongoro Biosphere Reserve (with the adjoining Maswa Game Reserve) under UNESCO's Man and the Biosphere Programme in 1981 and inscribed on the World Heritage List in the same year.